Almost being branded as a workaholic, it was high time I proved the cynics wrong.

A planned trip to London had fallen through when I got a chance to go to Vaishnodevi with a friend. (Yeah, yeah, I know the difference!)

I jumped at the opportunity. And said yes. She let me know that some of her family members would be part of the group. More the merrier I thought.

The plan grew. Amritsar was added to the itinerary. Just two days, but why not, I thought. The Golden Temple beckoned. And so it happened. 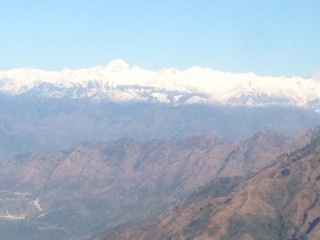 Before long, I was up, up and away.

The way to get to Vaishnodevi is by flight or train to Jammu and then by road to Katra. We took a flight to Jammu.

On reaching Jammu we had to wait for our fellow traveler and my friend SG and so we organised a car to take us around a couple of places.

Security was tight in most places. And mobiles and cameras were not allowed inside the main gates. My ipod was declared an ‘electronic item’ and debarred from entering too.

Two places of worship and several monkeys later, we were heading back to the airport to pick up SG.

Just as we did that we felt the first drops of rain. As we set off to Katra, it was cold. And grew steadily colder. And rainier. And as we wound our way uphill, we realised that if this was the weather, our trip to Vaishnodevi by helicopter was suspect.

The road from Jammu to Katra is fairly good and we reached in about 90 minutes even with the rain.

Once checked in we stepped out of the hotel!

It was freezing. And rightly so. The locals merrily informed us of the first dusting of snow on the mountain tops off Katra. Oh well, it IS winter isn’t it, I thought.

The only problem now was, would the helicopters still operate?

No. The locals shook their heads pessimistically.

The most optimistic one brightly encouraged us with a fatalistic, If it has to happen, it will happen. It’s HER will.

By late evening as we wended our way to the market a pall of gloom had descended on us.

But we were a determined lot. A mere helicopter flight was not going to stop this motley gang.

We had dinner. Much rajma-chawal, red beans and rice were relished. Aloo parathas, gobi parathas, and mooli ke paronthe made their way to our table. Followed by thick sweet lassi and even salted buttermilk. A satiated, well fed gang walked out of that eatery.

And as we stepped out SG’s Mother excitedly said, I can see stars!

Don’t mistake this for a metaphor. We all looked up and could see stars in the dark sky. That meant the sky was clear! Wheee!

We went back hopeful. But still a niggling doubt remained: What if tomorrow is not like that? What if it rains tomorrow?

The next morning however was beautiful. A patch of sunlight lit up the mountain facing our hotel window. What joy!
And so with great gusto we were all set to go,

The Vaishnodevi shrine is approachable by a long and winding road uphill to about 6200 feet above sea level. It’s an 11 kilometer walk which most devotees prefer to do by foot. Since it is uphill it takes between 4 to 6 hours of steady climbing. Horses, ponies and what are called ‘Palkhis’ are available to aid the young, old, infirm and disabled.

Almost a decade ago J & K Tourism started a helicopter service. A barely 5 minute flight takes you from the helipad in Katra to Sanjhi Chhat, the helipad in Bhavan, barely 3 kilometers away from the shrine.

Now this service operated by Global Vectra and Pawan Hans is literally a breeze to avail of. Bookings can be done online through the Vaishnodevi Trust site. Details required are what you’d require for any flight booking – name, age and identification details – ideally a PAN card number.

I’d shared my PAN card number with SG’s sister MK as she had done the flight booking to Jammu and also the helicopter booking.

As we checked into the flight in Mumbai as a group she had got all our PAN cards and given them back as we proceeded for security check.

I have a standard place to put my PAN card in my wallet but in the hustle of going in for security check I just shoved in my wallet and decided to put it properly later. Bad decision. Bad, bad decision.

If only I was one of those meticulous types. A place for everything and everything in its place! But no! I’m in a rush. I’m excited and… And.., I’m finally off on a holiday! Is a PAN card going to delay me by a few precious seconds at this juncture? No way!

I’d forgotten about the PAN card till the morning of our departure to Vaishnodevi. We needed to show the PAN card as identification at the helipad.

I opened my wallet with a flourish when MK asked me to remember to carry mine as we were leaving.

And then I froze. My PAN card wasn’t there.

What had I done with it? I tried to jog my memory. I knew for a fact I had put it in. Did it drop off somewhere during the security check? Somewhere else? On the aircraft to Jammu? Or while we were moving around in Jammu?

SG and MK were remarkably cool. They helped me look for it. Each of us checked my wallet. CHecked my bag. Just in case. Checked my wallet again. I removed the ATM slips collected in there. Rearranged the notes. No sign of my PAN card. 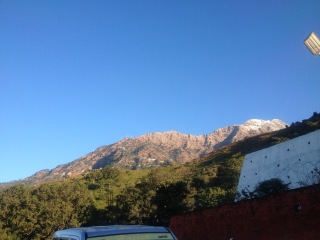 Twenty minutes later, we started looking at options. My driving licence could be used as an identification. But at the back of my mind I was worried.

On two counts. If I wasn’t allowed an alternative means of identification, this trip was not happening. And then there was this whole issue of getting the PAN card made again.

Oh why oh why had I been so foolish, I berated myself!

SG’s family was most understanding. Her Uncle (Mamaji) most optimistically said we’d manage.

But at the time for check in, we were told off. No way could we go without a PAN card. Mamaji convinced the person at the checkin counter that we had forgotten the PAN card at the hotel. Much apologizing, pleading and persuading later, my driving licence was accepted. The person at the counter reproached us for being so careless. I agreed with him, apologising again. He let us go. Finally!

As I turned away, having averted a near-cancellation of my trip, I don’t know what prompted me to do it, but I pulled out my wallet and looked again. There, in the middle of some 10 rupee notes nestled my PAN card! I couldn’t believe my eyes!

I gave a whoop of joy, ran back to the window and proudly displayed the card, grinning much like a child who had got an ice cream after throwing a tantrum! The man at the counter nodded sagely, pulled out the check in sheet again tallied the numbers and handed my card back to me!

As I turned back towards SG and family there were incredulous looks all around. Both MK and SG had checked my wallet, over and over again! I had checked it at least 3-5 times. And we had not found the PAN card. And here was the elusive card, all the while out there! Or in there, should I say?

Even now as I think back there was no logical reason for me to have looked into my wallet at that moment. We had already been allowed to go by the man at the counter. I don’t know what prompted me to open my wallet again. I still don’t know. And I’ll leave it at that. There are some things that just cannot be explained…
They say these things happen. Calling it a miracle will get cynics up in arms. I am not labelling it.

So on we went. More in the next round…

And yes.. if you get inspired (and called) to make this trip, the link below will help.