I read Marian Keyes with great eagerness and have read most of her books. 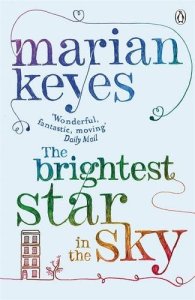 o to get one more handed to me to read was just a sheer delight.

I started The Brightest Star in the Sky with great gusto. For those eager to lay hands on this book, I must warn you, it’s rather a thick book. Okay… it’s a fat book.

But Marian Keyes keeps you on your toes right from the start with a character you don’t know moving through all the characters that live in a particular building.

If you’ve read Marian Keyes, you will know her characters are the usual everyday people, accomplished and flawed, funny yet human and in the end very very human.

The Brightest Star in the Sky traces the lives of several characters all intertwining seamlessly with each other – most of them living in the same building and the others coming in and going out.
There are enough reviews about Marian Keyes’ books out there but if there is one reason why I like to read her book it’s because of the innate humanness of her characters and how somewhere behind all the despair, all the wrongdoing, all the anger, hurt and the mistakes, there is an underlying feeling of optimism, the feeling of doing right by people, the desire to get things right and come out triumphant at the end. Each of the characters is unique yet universal, each different yet credible, each representing a flaw that we harbor inside ourselves and recognize out there. There’s always something to identify with in a Marian Keyes book and something to take away. And of course like every Marian Keyes book it keeps you going right to the end. Here, you can hear Marian Keyes speaking about it herself! I do suggest you read the book though.