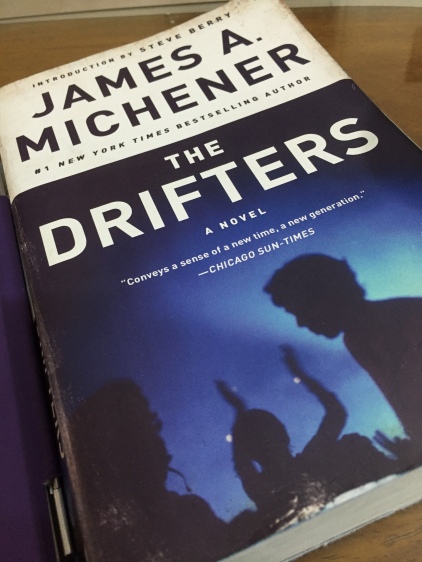 en you revisit a book, after what are decades, you read it again like a new book. Not because the book is new, but because you are. You are a different person this time while reading the book.

A book I was reunited with recently was The Drifters, written by James Michener – a prolific writer who seems to be lost to today’s generation of readers.

I first read this book when I was a teenager. It was one of the books that impacted me deeply as a compliant and somewhat conformist teenager – but one that got lost in the world of books. Thanks to a gift from a friend, I revisited my youth and a book I will reread once again, hopefully some time later.

The Drifters chases the lives of six young people who have left home – in an age of the dropout generation – trying to search for answers, search for meaning and of course in the end, for themselves.

This is more than a spiritual journey – and followed by the protagonist – a 60 plus gentleman whose work and travels lead him to cross paths with this young group – the tale unfolds in different parts of the world.

James Michener’s thorough research and intimate knowledge of the places explored, his insights into the mental trials and tribulations of youth, his political acumen, historical background – all combine powerfully to make this book an almost historical study of the 60s and 70s generation in varied parts of the world. From the US to Israel and from the Nordics to Africa, the dissatisfaction of a generation in the throes of change is brilliantly and very sensitively depicted.

What impressed me also was his extensive knowledge of music, his statement as an older protagonist on the new age music that seemed like ‘noise’ to him, his indulgence as he tries to understand it, his indignation at songs like Lucy in the Sky with Diamonds and finally his acceptance of the young as they are – even in their choice of music.

Call me old fashioned (or even just old) but I did like that each chapter started with a selection of quotes. In all the decades that I thought about this book this small aspect was something that stood out quite starkly in my dimming memories of this book.

Towards the end as one of the characters reaches a conclusion in what she wants to go back home anddo, James Michener sums it up beautifully…

“We agreed that a young person’s years of indecision were not wasted if they provided thinking space fortified by relevant data, even though some of the latter might not be understood at that moment, so that when the lucky moment of inspiration struck, it found tinder to ignite…”

If the book made a statement on that generation, decades later I can say we are making the same statements about today’s youth. The cycle seems universal and unending and James Michener’s insights into the youth and its culture stand true even today.

In the700 pages, as I read this book, I searched for answers too. Not quite the answers youngsters sought but wondering how a good book can still keep you up turning pages till the wee hours of the morning. This one did. Then and now.

I am not sure whether today’s reader can patiently go through the thick book, we are an insta-generation now. If you can, pick it up now.

(Uh-oh! There’s one more thing – the book is out of print and thanks to someone’s painstaking search I –joyfully – got a copy for my birthday!)